The tithe was an annual payment of an agreed proportion (originally one-tenth) of the yearly produce of the land, which was payable by parishioners to support the parish church and its clergyman.  Originally tithes were paid ‘in kind’ (wool, milk, honey, fish, barley etc).  By 1836 tithes were still payable in most of the parishes in England and Wales, but the Government had decided on the commutation of tithes—in other words, the substitution of money payments for payment ‘in kind’ all over the country—and the Tithe Commutation Act was passed in 1836.

A survey of the whole of England and Wales was undertaken over a period of about 10 years from 1836.  This established the boundaries of land, acreage of fields, and states of cultivation.  From the survey, parish or district tithe maps showing all plots subject to tithe were produced.  When the overall value for the tithe in a parish or district had been determined, the tithe rent-charge was apportioned fairly among the lands of differing quality and various uses in the parish.  The Tithe Apportionment, linked to the map, was drawn up as a result. 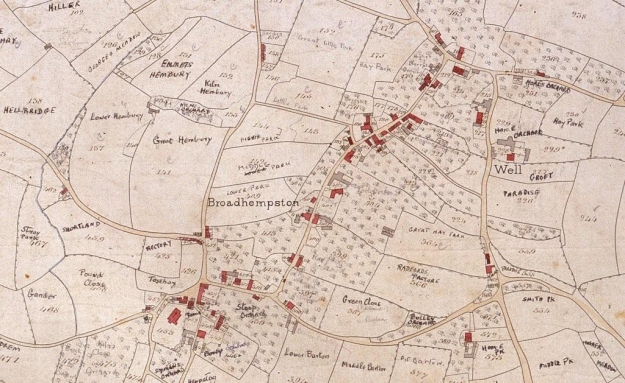 Extract from the Tithe Map of 1841

Update as of November 2017: Devon County Council have published a full transcription of Broadhempston parish as part of their Tithe Apportionment Project, together with a high quality map.

We are an amateur local history group interested in anything and everything to do with Broadhempston Parish.

We’ve collected and archived a wide range of historical documents including the 1841 Tithe Map and Apportionment, Church and School Records, and some personal accounts of life gone by.

We also collect and archive past and present images of village life.

Please use the contact form to let us know if you have any historical documents or photographs which you think may be of interest to us.